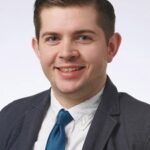 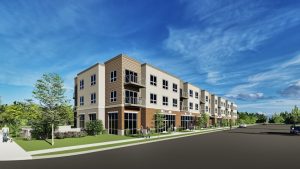 Sawall Development is putting forward plans to develop its third mixed-use project in downtown Sussex in recent years.
The Sussex-based developer recently filed plans with the village for a three-story apartment and retail building southwest of Silver Spring Drive and Main Street.
Jeremy Smith, Sussex village administrator, said the building would be roughly 60,000 square feet, and would include 18,000 square feet of first-floor retail space with 40 apartment units on the second and third floors.
Also included is 51 spaces of underground parking and a 123-stall surface parking lot.
Smith said the project will likely be worth close to $8 million in value.
Arthur Sawall, owner of Sawall Development, said the unit mix will include eight studios, 12 one-bedroom, 14 two-bedroom, and four three-bedroom apartments.
Sawall said this would be the first of the mixed-use projects he’s led that would contain studio apartments.
“We talked to a lot of people in the industry … and they have a waiting list on studios,” he said. “We said, ‘let’s try it,’ and I think we’re going to do well with them.”
Sawall added he is already seeing interest from a number of retail users for the first-floor space. He declined to name them.
The village’s Plan Commission this week approved project site plans, and its Community Development Authority approved a related developer’s agreement. The agreement will be taken up by the Village Board next week, Smith said.
Sussex officials had years ago identified this site along with others as a location for some type of mixed-use project, Smith noted. The site of a former canning factory had sat vacant for 20 years.
“We’ve had a sense for a long time where the building was going to be,” Smith said. “Actually what the architecture was going to be and all the important details, that’s finally coming to completion now.”
Smith said the village put together a Main Street design and development plan roughly six years ago to determine what type of developments would make sense for the area. The overall transformation of downtown included a complete reconstruction of Main Street and the establishment of a tax incremental financing district, which put money toward the road project as well as preparing various sites for redevelopment.
Sawall Development has completed the first two parts of the planned downtown commercial development so far. First came Mammoth Springs, an apartment and retail development located at the southwest corner of Main Street and Waukesha Avenue. Then a second phase of Mammoth Springs, called Mammoth South, was constructed to the south, across a 7-acre quarry pond from the first phase, said Smith.
In fact, Mammoth Springs was first brought up during the Great Recession, when Sawall first approached the village about redeveloping the site.
Sawall said that between the two projects, his firm has so far developed 260 residential units and 24,000 square feet of retail space. Nearly all of that space is completely leased.
The developer will also eventually build another mixed-use project at the former NAPA Auto Parts store, located across Main Street from Mammoth Springs. Smith said that is the final site the village identified in its Main Street plan for mixed-use development.
Smith said the village hopes all of the projects will total more than $55 million in value. Mammoth Springs generated $30 million in value, while Mammoth South added another $12 million.
“This is the culmination of the planning over all these years,” he said.